5 Studies on Fish Oil for Neuropathy and Nerve Regeneration 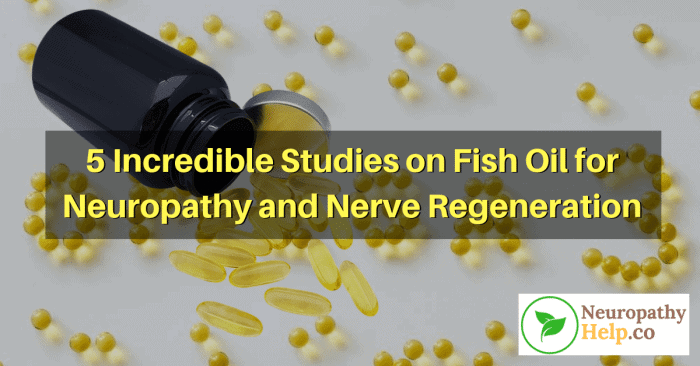 Most of us know that fish oil is a good source of omega 3 fatty acids.

Studies performed on the benefits of fish oil on treating nerve damage due to neuropathy and promoting nerve regeneration have found it to be an effective and safe solution to reduce the symptoms of nerve pain.

Even though the benefits of fish oil for neuropathy and nerve regeneration are ongoing, current research provides people experiencing nerve pain with renewed hope that taking fish oil supplements can improve their medical condition.

The following studies on fish oil for neuropathy and nerve regeneration will tell you the benefits of using fish oil supplements for treating nerve pain:

Researchers from the Queen Mary University of London in the United Kingdom discovered that fish oil can protect the nerves of adult rats, thus decreasing the risk of injury.

After treating adult rats with fish oil, they discovered that fish oil promoted the development of nerve tissue.

The researchers specifically focused their study on learning more about peripheral nerve cells.

The peripheral nerve cells transmit signals between the spinal cord and brain and the entire body.

Even though peripheral nerves can regenerate on their own, the recovery rates are very low and only effective in people who have suffered from minor injuries.

In the study, the researchers looked at the isolated nerve cells in adult rats.

They stimulated the isolated nerve cells to replicate the effects of accidents or injuries on nerve cells.

This did this by stretching the isolated nerve cells or taking away their oxygen.

Next, the researchers studied the sciatic nerves of adult rats. They discovered that high levels of omega- 3 fatty acids increased the rate of recovery from damage to their nerves. Not only was the recovery rate quicker, but omega-3 fatty acids also significantly reduced muscle wastage after the adult rats experienced nerve damage.

Researchers from the VA Medical Center in Iowa City studied omega-3 fatty acids in fish oil and discovered that fish oil supplements can restore damaged nerve in mice with diabetes. With around 50% of people with diabetes suffering from diabetic neuropathy, understanding the effects of fish oil on neuropathy and nerve regeneration is important.

The study also mentioned another research on diabetes and obesity that concluded that omega-3 fatty acids can help control blood sugar levels, improve liver function, and reduce inflammation. The consumption of omega-3 fatty acids creates protective molecules such as resolvin.

Previously, the researchers had observed that a diet containing omega-3 fatty acids from fish improved the symptoms of diabetic neuropathy in mice diagnosed with type 1 diabetes and type 2 diabetes. This new study examined why that was the case.

In the new study, researchers wanted to find out the effects of fish oil on mice with diabetes. The researchers put the diabetic mice on a high-fat diet and injected them with resolvin each day or gave the mice a high-fat diet where half of the fat was derived from fish oil.

The diabetic mice that were not treated with fish oil exhibited a reduced sense of touch in their paws due to having fewer nerves in the skin on their paws and decreased signal transmission along the nerves. The eyes of these same mice also exhibited fewer nerves.

Even though the fish oil did not reduce the blood glucose levels to an acceptable range, it did improve the health of their nerves in terms of both sensory signal transmission and density. The researchers also noted that resolving encouraged nerve regeneration.

They concluded that more research on the benefits of fish oil for neuropathy and nerve regeneration needs to be performed such as clinical trials with people. Their study on mice suggested that fish oil can reverse some of the damaging effects of diabetes on the nerves after a long duration of poorly- controlled blood glucose levels.

The researchers stated that they aspire to begin studies with people who have diabetes and suffer from peripheral neuropathy due to it.

3. Is Fish Oil a Potential Treatment for Diabetic Peripheral Neuropathy?

The researchers used pre-clinical studies where the subjects were diabetic mice who were given fish oil. The study concluded that fish oil slowed the progression of nerve pain and reverse diabetic neuropathy, which the researchers found out after looking at several endpoints.

The researchers concluded that more studies on fish oil for neuropathy and nerve regeneration are necessary to establish a definite connection between fish oil and diabetic neuropathy.

The purpose of the research was to examine the effect of dietary oils, such as fish oil on obese rats suffering from peripheral neuropathy. The researchers used 12-year-old rats, feeding them a high-fat diet for 16 weeks.

Thereafter, they gave the rats food containing 50 percent of the kilocalories of fat, which they replaced with dietary oils. Additionally, they fed a control group of rats with a standard diet and maintained a high-fat diet of another group of rats.

The duration of the treatment lasted 32 weeks. They examined both the sensory and motor nerve conduction, innervation of sensory nerves in the skin and cornea, thermal sensitivity, and vascular relaxation.

The researcher concluded that omega-3 fatty acids from fish oil could be an effective treatment option in people suffering from peripheral neuropathy due to obesity.

The researchers studied several studies to make the connection between omega 3 fatty acids derived from fish oil and its benefits on alleviating nerve pain caused by peripheral neuropathy and its role in nerve regeneration.

The researchers, after studying several case studies and their results in detail, concluded that omega 3 fatty acid supplements were found to be a safe and effective option for reducing nerve pain.

The researchers also stated that randomized double-blind controlled trials needed to be conducted to confirm the use of omega 3 fatty acids for treating peripheral neuropathy.

As pointed out in all these five studies, more research on fish oil for neuropathy and nerve regeneration needs to be done to confirm its benefits on reducing nerve pain.

However, there is no harm in supplementing one’s diet with fish oil supplements to reduce the symptoms of peripheral neuropathy. 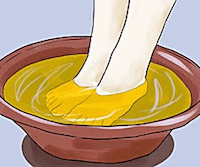 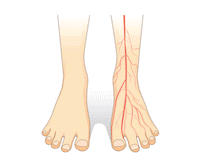 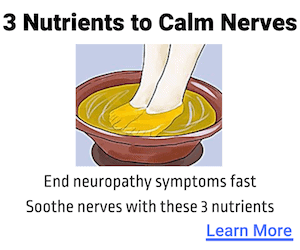